I am not steak, you can't just order me!

Ever get that feeling of "if only I had a day off to work on this or that" and then when you do have the time off you end up having no motivation? Or you have the motivation, but it all comes out less than stellar and you feel like it was wasted time? An optimist would claim that no time working on your art is wasted, even if you feel less than fulfilled. The pessimist just wants to binge on ice cream and slump on the sofa for hours saying "f*ck this, I'm done" and watch the original Mad Max trilogy. 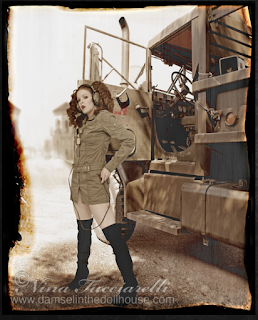 Anywho, I'm happy to report that I recently had the opportunity to perform live on stage with the Sarge back on May 16, right here in Bozeman during his song ADSR: Music from Space. He also performed two live sets during the night and it was such a treat to see and hear his new songs from This is Tomorrowland. Here's a quick little clip of our performance:

Sharing the bill for the night was DarkMountain Cirkus, a band from Deer Lodge, who were a lot of fun and I highly recommend that you check them out if they haunt your neck of the woods. They tackle so many different genres that it's such a hoot to listen as they go from country to metal to rap to 80s pop. In spite of soaking wet floors and a leaking ceiling (seriously, I'm glad no one was electrocuted and no equipment was damaged) it was a memorable night and we made some inspiring new friends.  We look forward to seeing DarkMountain Cirkus again in July as all of us will be performing at the Montana Dark Arts Festival. 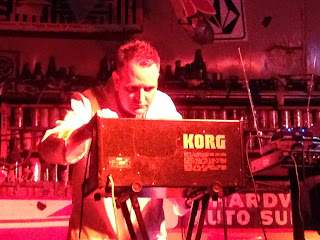 
In other music news, I released one of my newest songs from Feast of Villains via SoundCloud just last week. It's called Hannibal and it's about…well, the character Hannibal. I chose to focus on the character from the television series as the entire cast, director, and artistic team go above and beyond with the grotesque yet beautiful fantasy of it all. The song focuses specifically on the events in the season two finale as the untouchable Hannibal confronts Will and loses the friend he thought he had and the trust they had built between them. So damn good! I know my song doesn't do it justice, but it's fun to pretend to be a broken-hearted evil character standing on a blue-lit stage in a German underground club while crooning to a sea of goths within a smokey room. At least that's how I picture it being sung.

Here's my new song "Hannibal":
Hannibal by Damsel in the Dollhouse 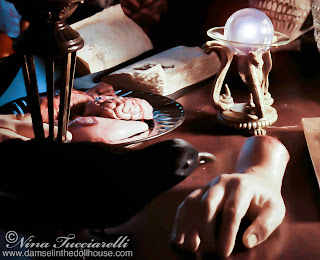 (not entirely Hannibal-esque, but there are organs on the menu!)

The third season of Hannibal returns June 4th so get excited, fellow Fannibals! I also bought the Art and Making of Hannibal book which you can currently find on Amazon. I will admit, it's not as exceptional as the Art and Making of Penny Dreadful book (which is absolutely gorgeous and is another of my favorite shows) but it's definitely worth having if you're a fan. It shares information and lots of photos of the costumes, the props, the sets, and how they did some of those amazing special effects. The cover alone is a work of art as the heart on the plate resembles a 3D model that's shiny and icky and wonderful to look at in person. Just buy it already.

Here's the Hannibal book:
The Art and Making of Hannibal 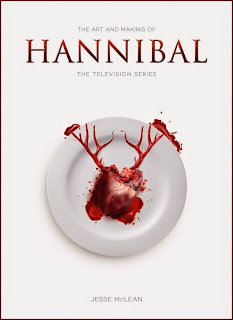 
Here's the Penny Dreadful book that is simply delicious and absolutely a must have if you love the show. It details each of the season one episodes and includes so many sumptuous behind the scenes photos and sketches. Every page is dripping with gothy gothiness!
The Art and Making of Penny Dreadful 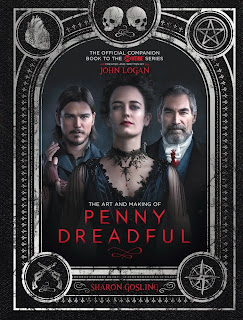 
In photography news, back in April I had the wonderful opportunity to photograph the talented aerialists, Karen and Galen, of Aerial Arts of Bozeman. Click on the link below to see the full gallery of images as they performed some truly amazing twists and turns and extensions via silks, lyra, and trapeze.

If you are interested in learning from these two incredible artists,
please visit them at: Aerial Arts of Bozeman Website 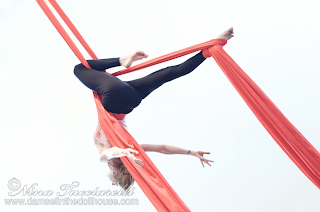 No time for the in and out, love. Just came to read the meter!

Busy, busy, busy…working on the album. But as usual, I always feel the need to add yet another project to my plate for kicks and giggles. And, well, this one would definitely supply some serious giggles. I'm talking about my epic plan to photograph a series of fake album covers for none other than Sergeant Sawtooth. Here's a sampling of what has been discussed thus far:

Just let the awesomeness sink in for a moment and imagine every single one of these strokes of genius. So you see, I'm on a mission to make these photos happen. Because minds need to be blown.

Oh yeah, and I just found this incredible nightmare fuel at Nu2U. And she is now mine, all mine!!! She's a talking doll, but her voice mechanism is broken. I'll need to see if there is any way to make her talk. You know, cause I'd like to hear what satan sounds like. 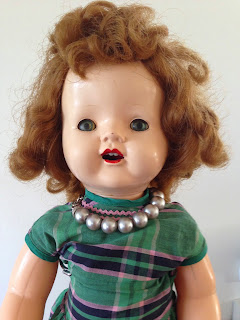 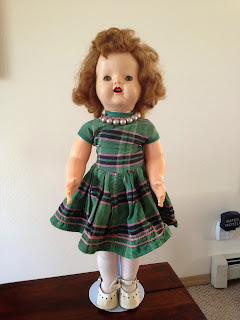 I have named her Hildegard. Hopefully she doesn't murder me in my sleep. For her lord and master, satan.

I hope she makes friends with my other creepy brethren. 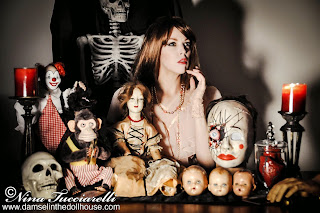 Opening quote: A Clockwork Orange
Posted by Damsel in the Dollhouse at 8:28 PM